My advice? ..turn the lights off & pretend not to be at home! 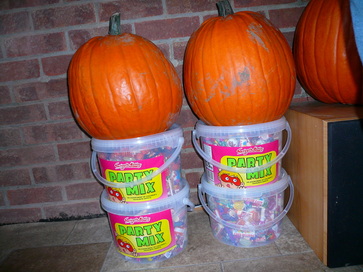 You'll need ALOT of these we go through in excess of 22KG of sweets every year! each tub is stuffed to the gills with additional sweeties, we go through a tub per hour typically.

Those are big pumpkins & big sweetie tubs, Swizzels come highly recommended, old skool sweets so if you are left with any they last & are what you used to buy as a kid! ...ah memories.
It all started many years ago.
I was probably seven years old, halloween was exciting, at the height of the myth that was razors in apples.. in the late 1970's I guess
My friend Nick Bassett & I glued several cardboard boxes to his homemade pram wheels go-kart & decorated it as our "ghost kart", to be towed by what turned out to be a very unwilling dog! ..still the seeds were sown, not for the sweets but instead for the thrill of that night which has always been my "christmas" as my wife & daughter would attest to!

Home made head carrying ghouls followed, werewolves & the like..

Too old, (or so I stupidly thought) to be out trick or treating, (we never tricked) I had to turn my nights fun to entertaining & making wary those who bothered, sadly during those times as few as 0 as many as 40 children & teens, not many parents accompanied their children in the late 1980's..
Low voltage electrified door knocker, or electrified sweet tray,  a shop mannequin car crash scene, animatronic hand & a singular pumpkin carved laboriously free-hand (remember this was pre home computer & internet) so you had to use you own creativity, kitchenware & patience.

My single carved pumpkin each year was never enough, my mother (a primary school teacher) would take in for the children my "kin" to set the scene in the hope they'd get as much out of halloween as we did..

When I returned to Cambridgeshire & to a new village, our cul-de-sac was full of children but very little "Halloweening" ..this is the field of dreams moment "if you build it they will come" phraseology which has proven so true, we had 8 kids on the doorstep in year one... the key as has always been a lit pumpkin to signify you also celebrate Halloween, ..do drop by, there may be tricks, ..there will be treats!

Roll forward a few years it's growing, merely by word of mouth we now have a typical turn out of 450+ children ....& adults taking numbers up to well that would be anyones guess!


By American standards we are very small displayers & participators of halloween, by uk standards we are simply "nuts going to all that effort"
Each year we'll typically buy in 23+ kg of swizzels sweets (swizzels matlow are a great uk sweet firm, not cheap chinese sweets of dubious origin), & sweets from my youth, so if there's any left over, I get to eat a few too!

What an excuse to ignore gardening (smoke machines work better on wet longer grass) ..however the wind is usually up & ruins any chance of a low level fog, despite this smoke machines abound.
With all the footfall we receive each year you have to move "stuff" around this means not merely sitting behind your front door with a voice changer (& hoarse for several days thereafter) & the burgeoning chinese novelty (& everything else market) has made it so much easier along with ebay to pad out your halloween kit & props.

I obtained 2 dvds with which to perform a "floating heads illusion in our bay window, having to unscrew the wall mounted LCD tv, lay it flat on the arms of my favourite chair propped up some perspex & supported it with bricks... my first taste of something a touch more visual if not visceral.
Set up was taking around 8 hours work that one year I decided to help myself out & give the children a scare which is when I secretly bid & won via ebay an optoma projector to utilise the fabulous halloween animations dvd by Canadian Mark Gervais

Wow, what success ..I'd rid myself of a bay window display which had to be sectioned off by landscaping weed control material & within an hour I had a looping 8 minute (ish) hallow-palooza to entertain the waves of children & parents.
(I justified this purchase by promising the wife that it'd be back on ebay within a week, after we'd watched a handful of both her & Izzy's favourite movies on it, ...it's still here, alongside another projector which will add to the effect this year of 4 or 5 windows with scrim & various effects, no additional cost involved, just pre planning, ...& (ahem) no tv for a few days.

Currently there are 4 hallowindows in the series, have a poke around the you-tube link below!

I'd been browsing Zombie pumpkins.com since it first popped up back in the day (pre-broadband), Ryan the "patchmaster" as he is known was just starting to develop the style & skill he has since laid down on his very welcoming & not at all scarey site.

I'd printed off & free-handed a rather complicated skull pattern from somewhere (as I never thought of stencilling it onto the pumpkin) which took me the entire duration of  Lord of the rings to carve with wholly inadequate cutlery...yes cutlery! ..winning design, great feedback ..."want more"!

Some seasons later I use & recommend Zombie pumpins, Jay Ball, &  Stoneykins website patterns
..between them they've got the lot! all 3 are superb guys & masters of there art I have included links to each of their sites elsewhere, do visit & support them, a membership costs a pittance for the pleasure it can bring, the membership & active forums prove it's not just for kids.
For Cut through stencils (predominant in the uk)    I heartily recommend...
http://www.zombiepumpkins.com/
http://www.jamminpumpkins.com/
For the more adventurous (those wishing to try shading in particular), Stoneykins is where it's at! http://www.stoneykins.com/

Please support these sites who between them make up a significant proportion of worldwide carvings beyond the normal 5 minute hack job!
If these guys cannot cover some of their costs hosting their sites & selling membership, which is incredibly cheap, often tiered to suit all pockets then pumpkin carving as we know it will be hacked apart.
Some unscrupulous types sell pirate kit on ebay from all 3 of these great guys, they are real bad "hack-jobs" ..killing the art, the difference is palpable, akin to stirring salt into your favourite hot sweet beverage!

Also, by visiting official sites & forums you will get far more help than a shonky Auction site (eg. ebay), cut & paste cd for £5.00 that may infect your computer with a nasty virus!

Come by the( ZP) forum, Zombiepumpkins where I'm often to be found under the moniker of "Gus" ..despite the fact we carry knives (for carving) we are a friendly bunch, ..& what a place to show us what you can do! ...around 142 fine stencils (yes, & childrens favourites) just on that site alone, we don't focus on outdoing each other we focus on enjoying our chance to carve, & if you're thinking of poking more than triangles from a pumpkin, you're halfway there!

Dont dither! ..dive in & flesh out a masterpiece! ..come up smiling with a handful of guts & some artistry to share.

Thanks for dropping by, ..more photo's & info to go up as I find where i've put it "safely away" in the meantime.


NB copy this link into your browser  to visit Marks Canadian site (dvds are region free) & see all of his work to date with far more visual impact than you tube footage can offer.
http://hallowindow.com./