..OR SCARING CHILDREN FROM A DISTANCE. 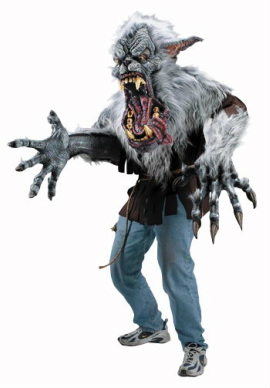 Creature Reacher is a well known U.S. brand of oversized, costumes with large arm extensions enabling you to "shock" from a distance without running up & potentially knocking folk & small children over, which is a distinct possibility in a costume with limited visibility & tottering munchkin folk all around..

This specific costume consists of a well padded (comfortable) head & shoulders mask, raggedy thick material shirt, a rope belt, 2 x oversized reaching arms, (you hold sticks within the foam filled arms).
So you don't have to invest in something this elaborate to make for a good effect (scare) however it adds to the fun..

I've had mine for 5 yrs now it's proven very durable, if not actually wearing it make it an actual static prop, the advantage there is that next year alot of visitors will assume it's still a static prop! ...then you jump!

If you expect someone to stand all night long as a seemingly motionless prop, make sure you have a suitably disguised seat for them to get some comfort from & disguise basic swaying movement, consider setting a costume like this amongst several strobes so movement is disguised & enhanced when the monster jumps, roars & flails out towards victims, or hide them in suitable gloom in a comfy position that allows them to get to their feet quickly or lunge from the seated position!

Previously i've constructed a shed prop that was blanked out & beckoned children over with a kindly "drawing in voice" then jumped out from behind black landscaping curtain.
Several things were wrong with this approach, the energy & noise used over an evening, the need to remove the big mask & arms to do other things, & the potential to topple a child who was too close when I exited.

As I try to rotate or refresh props so it's not necessarily the same every year ..the last thing you wish for children to mouthily state, is "I know, he's a werewolf, he's hidden in the dark somewhere & will jump out"... very disheartening potentially.

So this year (after several years absence) my ebay won Creature reacher costume, was brought out again, improved by the fact that I arranged myself as a supposedly static prop amongst some pumpkins half visible...

So I am sitting for the majority of the time on a hastily prepared seat, using a child's backless plastic booster seat it gave me enough of an idea where to sit without taking my mask off, the long arms (which give you a potential 9ft span finger to finger reach) are placed with minor support so I can put  in 5 seconds max (unassisted) ..don't ever think on Halloween night you can get help, everyone is doing their own thing & watching for the next batch of trick or treaters..

Just as importantly I was able to safely stow a few bottles of beer to grab & glug in order to keep the vocal chords (lots of shock-roaring) lubricated, & to tide me over in the coldish night!
From the seated position I could scope out the size, age & proximity of the visiting munchkins &  take the appropriate action / response, jumping up or simply roaring & scrabbling with my arm extensions, ..it's not on to grab children a shock is effective, by sitting I could really control my movement & visibility as to catch the unwitting, a few parents worked it out judging by the grins on their faces from out on the road.


Comfort is the order of the day when considering any costume.

If expecting someone to wear a costume for multiple hours, make them as comfortable as possible, toilet breaks, a drink (or two) ..some food to gulp down if possible, ..hot-dog for instance.


I always prepare a few charcoal pocket warmers, as you never know how the weather will turn out, especially if fitted out with a fabric costume that exposes you in some way to the harsher elements October an bring, or unable to move around too much.

Full face masks can get a bit drippy due to condensation so a bit of kitchen towel may be of help to deal with beer, ketchup, make-up spillages etc, as you do perform on the hoof, dropping your beer / hot-dog at a moments notice to costume up & get in character...

Go through a few ground rules with whoever is wearing the costume as how far to go in terms of scares, generally the person ideal for the job will be someone who has a child themselves & is used to talking to the occasional fretful child.

Whilst the costume is typically to scare, there will be times when you have to coax a child to stroke the gnarled hands of the slavering beast in order to reinforce the "fun, not real" aspect of trick or treating..

Treat any costume / makeup preparation with due diligence, always be ready & fully made up by 4pm not to get caught out by the earliest & youngest trick or treaters, it's often their first time out! ..you set the standard for their future appreciation of a spooktacular Halloween!

A phrase I often use children can relate to (or at least have a partial understanding of)  is..
" It's just for fun, ..for one night only, ..all pretend just like the Dr Who monsters"
...works pretty well, & you have appreciative parents & a bolder child who will relish visiting next year rather than a burnt in fear of your house on a future dark Halloween night!

No, we haven't had any pant wetters courtesy of this costume, ..yet!